skip to main | skip to sidebar

Oh my goodness.    It is sizzling hot down here!  Too hot to go outside so I took advantage of the hot temps to clean out all the crap in a sideboard that belonged to my mom.

She “antiqued” the sideboard years ago using an antiquing kit which was popular back in the 80’s. 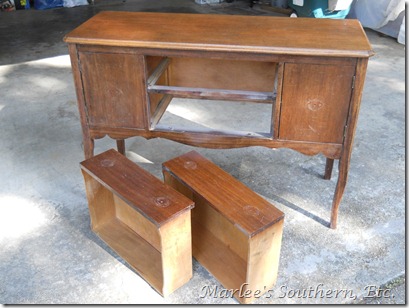 A couple of coats of Décor White by Behr covered the piece nicely.     I stained the top using a stain I found in my hubby’s workshop.  The original hardware was put back on because I liked the look of it.  She is one sexy sideboard with those curves! 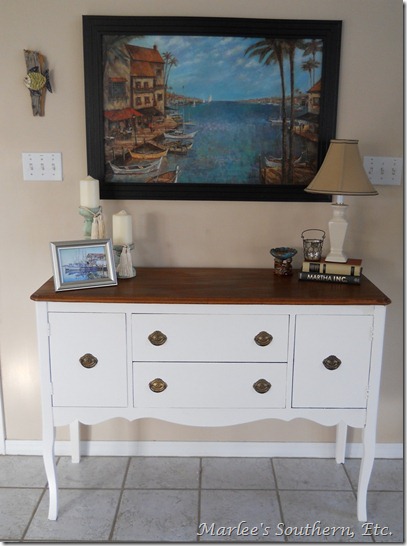 Since I had all the materials on hand, this makeover did not cost me a penny!     Love it when that happens!

Thanks for dropping by.

I hope you will visit the new party Tweak it Tuesday hosted by Brenda at Cozy Little House, Nifty Thrifty Tuesday hosted by Linda at Coastal Charm, Wow us Wednesdays hosted by Kim at Savvy Southern Style, Transformation Thursday hosted by Gina at The Shabby Creek Cottage and Potpourri Friday hosted by Honey at 2805.   You can find me there!!

After months of looking for the perfect headboard, I stumbled across one, literally, at a yard sale.   On my way to check out a small lamp I had spotted, I tripped over a headboard in my haste.    Guess you could say I was head over heels in love with it at first sight! 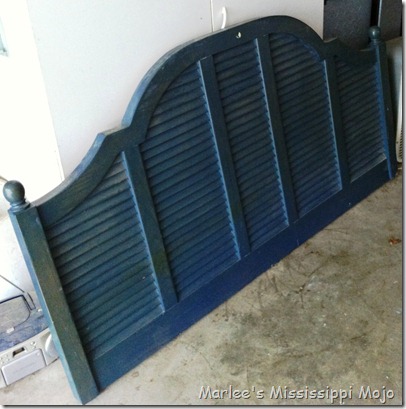 The faux shutter-look headboard had good bones.    It was a sturdy oak that had been painted blue.   I saw potential!   For the low price of $10.00 that headboard came home with me.

Usually my hubby rolls his eyes in my direction when I bring stuff home from yard sales and then promptly asks me where I am going to put it, but this time was different!   He knew with a little bit of TLC, it would be perfect for our coastal themed bedroom!

The shutters were a booger to paint but I persevered. After a couple of coats of Décor White by Behr, I shabbied it up a bit. 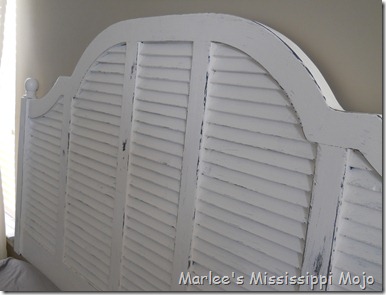 My wonderfully talented and always willing to help hubby built some legs for it and now it graces the head of our bed and I couldn’t be happier! 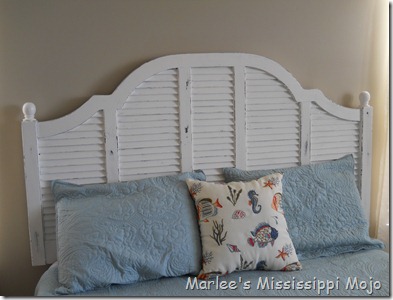 By the way, Paula Deen has a shuttered headboard in her home furnishings collection and it doesn’t cost $10.00!!!

Thank you for visiting today!

For oodles of inspiration and  thrifty treasures galore, please visit the Thrifty Treasures party hosted by Rhoda at Southern Hospitality, Nifty Thrifty Tuesday hosted by Linda at Coastal Charm, Wow us Wednesdays hosted by Kim at Savvy Southern Style, Transformation Thursday hosted by Gina at The Shabby Creek Cottage and Potpourri Friday hosted by Honey at 2805.   You can find me there!! A Touch of Turquoise

Recently I have been in the mood to paint so before that feeling turned into a distant memory, I acted on it.

My first project was a small table I bought at an estate sale a couple of weeks ago for approximately $1.00.   You can read about all the goodies I found that day here. Overall, the table was in good shape with the exception of the top. 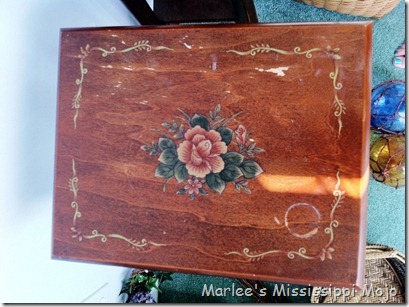 Using left over paint from other projects, I painted the top turquoise and the legs white. Since I have no artistic abilities whatsoever, I stenciled the top with a Martha Stewart nautical stencil purchased earlier this summer with a Michael’s 40% off coupon. The table needed a little something extra other than the lonely starfish so I decided to stencil a border on. I quickly discovered this would be too labor-intensive and began to paint dots around the edges using the highly specialized method of dipping a pencil eraser in paint. 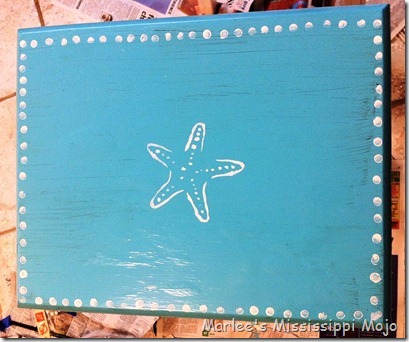 This precious little starfish table now resides in the master suite in a seating area I carved out for myself. The bamboo ottoman was a frugal find last summer, the pillow was on clearance at Stein Mart and the chair was a hand me down from my sister so this cozy corner was beautified on a budget. 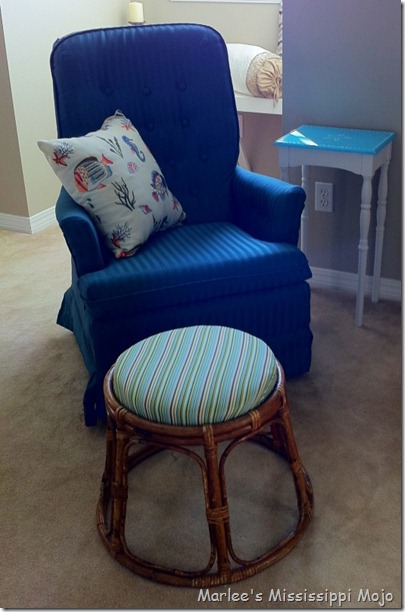 The next undertaking was an old stool that originally belonged to my parents I have had for it about 20 years and it has gone through a couple of transformations. While going through my tea cup phase, I painted tea cups on the seat with “steam” rising out of each cup. It was a cool 3-D effect at the time, but now it was nothing but a big ole pain to scrape off that puff paint. After determining that sandpaper wasn’t working, I tried nail polish remover and it worked like a charm! 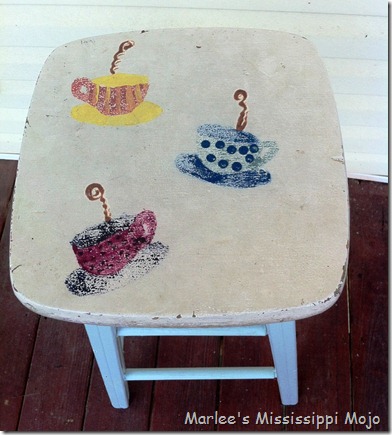 My intention was to paint the seat turquoise and the legs white because I liked the way the starfish table turned out. I was almost through painting it when I realized I had painted the whole stool turquoise and even though I ♥ turquoise it was too bold a look. Then I had the brilliant idea to do a whitewashing treatment on the legs to tone it down and that didn’t look right either. Out came the white paint and I finally ended up with what I originally hoped to achieve. Once again, I used the Martha Stewart nautical stencils because I think they are so stinking cute. 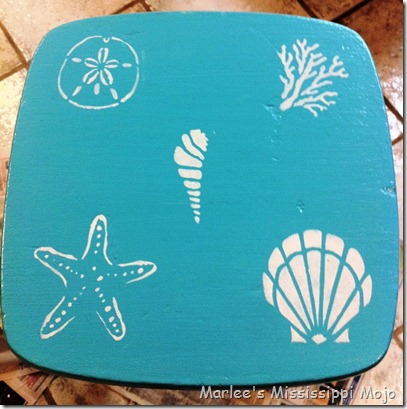 Here are the completed paint projects side by side.   Please excuse the work site.  I was painting drawers also that day. 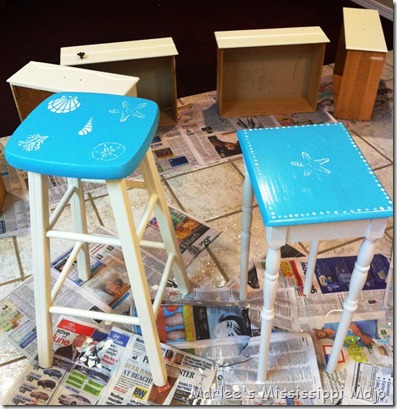 Thank you for dropping by to see what I have been working on.  I am linking to Nifty Thrifty Tuesday hosted by Linda at Coastal Charm and hope you will drop by there also.

Have a blessed week!

Promote Your Page Too

Marlee
Jackson, Mississippi
Hi! My name is Marlee and I am a full time resident of Mississippi and a part time resident of L.A. (Lower Alabama). As a wife and mother of two sons in college and a full time worker outside the home, I stay quite busy. My downtime is spent "thrifting" and blogging with a little bit of gardening thrown in. I hope you will join me as I recap my adventures.

Blogs I want to be when I grow up